Erica here! One of the things I hope to do with By Her Shelf is to encourage readers to examine what their reading life says about them, and if it’s reflective of the person they are/want to be. In this vein, I’m opening up a controversial can of worms. This post doesn’t have the answers to the questions it asks…it just recognizes the need to have the questions and have the discussions.

Although it just came out Friday, May 31st, it seems everyone on my social media has seen and is commenting on When They See Us, the new docu-drama based on the trial of the group of men formerly known as The Central Park 5 (now the Exonerated Five). 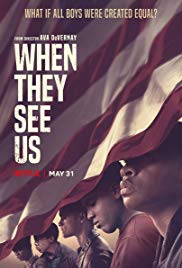 Ava DuVernay’s TV mini-series took over social media and Netflix, and has caused at least one key figure in the trial to experience book-related backlash.

The former head of the Manhattan District Attorney’s Office’s sex crimes unit, Linda Fairstein, has been receiving backlash for her handling of the trial all over social media and in the media. Many who watched the When They See Us have started campaigns to have the mysteries Fairstein has written boycotted, with calls for booksellers like Amazon and Barnes & Noble to stop carrying her books and boycotts of her publishers, Simon & Schuster and Penguin Random House.

We live in an interesting time when it comes to how we treat the art of people we don’t agree with morally, politically, or religiously, regardless of what their work addresses. Yet many literary works that are considered part of the classic canon or well loved were written by extremely flawed individuals. The cold hard fact is talent isn’t given only to the most virtuous or agreeable among us. But what does this obligate us to as readers, if anything? Can I read literature by people whose personal lives or belief systems are repugnant? Should their work be judged on its merits alone, or must we take the person who created it into account when choosing what we read?

This issue isn’t just affecting readers. The #metoo movement has spotlighted several celebrities in the movie and music industries accused of sexual assault, and many of the accused have been cut out of movies or experienced plummeting sales as consumers make their disgust and outrage felt by not financially supporting their projects. The recent college admissions scandal cost Lori Laughlin several roles, and caused some to wonder about Felicity Hoffman’s inclusion in When They See Us playing the aforementioned Fairstein. Even Chick-Fil-A was allegedly denied a restaurant in an airport due to donations made to Christian groups with “a history of anti-LGBTQ discrimination.” It seems Americans and decision makers have decided to “cancel” artists over personal beliefs and conduct unrelated to their works.

Yet there are still several in the pop culture and literary canon who, given this line of thought, should be removed from required reading lists. Lists of beloved children’s authors and members of the American literary canon include men and women who were/are attempted murderers, sexual predators, racists, Nazi sympathizers, perpetrators of domestic violence, drug abusers and alcoholics. How far should these campaigns to scrub an author’s work go? What traits should they look for in authors to determine who should be effectively silenced? Who gets to decide?

Ultimately, America is touted as the land of the free. Every American has the right to choose whose books they will read, movies they will watch, and food they will eat (except in public schools with set curriculums in their formative years). You can spend your money and time in support of the things others are in opposition to if you’re so inclined. I’m most interested in the question of reader responsibility: What responsibility do we have to express our personal convictions in our reading lives beyond what we read? Should who wrote the book matter just as much as or more than the content of the specific work? Let me know your thoughts below.

Articles of interest (not endorsements or agreements):

View all posts by Erica Hearns